In March of 1998, Reverend Dr. William J. Turner became the pastor of St. Mary Church, Chelsea, MI. He inherited 750 families and a newly consolidated facility that featured the church (1965) the rectory (1977) a Gathering Space (1996) the Fr. Dupuis Parish Life Center including the Hall, the Parish Offices, and an Education Center (1998).
In March 2004, the parish recognized Fr. Turner’s 25th Anniversary of Priesthood. The occasion was celebrated on Saturday, March 27 with an Anniversary Mass attended by parishioners and 15 priests including Father’s uncle, John Miles (Scordamaglia) C.R., and with a dinner and a program in the Parish Hall.
On September 19, 2004, the church was consecrated by the bishop. This was made possible when the debt for all parish construction had been paid. The altar and walls of the church were anointed, candles were placed at four consecration points representing the four points of the compass, and incense filled the church. Following the beautiful ceremony presided over by Bishop Carl Mengeling, the mortgage was burned at the Garden of Peace and then a reception was held in the Parish Hall. Father’s book “In My Father’s Steps,” in collaboration with a father and son of the parish, was published in 2005, A second book "In my Father's Footprints was printed in 2011 and the third volume of the trilogy "In My Father's Path" was published in 2014.

In 2006, Father Turner was named a Knight of the Holy Sepulchre by the Holy See, and was installed by Cardinal Francis George in Chicago on October 8 of that year. He was presented with the “Pilgrim Shell” by Patriarch Archbishop Michel Sabbah in Jerusalem on May 18th, 2007 and promoted to Knight Commander in 2009. He serves as Patriarchal Liaison to Arabic Roman Catholics living in Michigan.
Canon Turner served on the Board of Directors of the Holy Land Christian Ecumenical Foundation, from 2012 to 2016 and currently serves on the Executive Committee and as the Master of Ceremonies for the North Central Lieutenancy of the Knights of the Holy Sepulchre. He is also on the Board of Directors for the Chelsea Players, and is Regional Vice-President for Clan Lamont USA. He has earned doctorates in Theology and in Cultural Anthropology.
In 2016 Canon Turner was named the Priest for the Year of Mercy for the North Central Region of the Knights of the Holy Sepulchre and from 2016-18 he was Michigan State Chaplain for the Knights of Columbus.
On March 30, 2019 he celebrated his 40th Anniversary of Priesthood with a Mass and a dinner following in the Parish Hall. In lieu of gifts, over $12,000.00 was donated by the guests to support Christians in the Holy Land.
On September 28, 2019, Canon Turner was honored by the Knights of the Holy Sepulchre, who presented him with the St. Pius IX Award for service to Christians in the Holy Land. The order also presented to him the honor of the Silver Palm of Jerusalem in September of 2022. 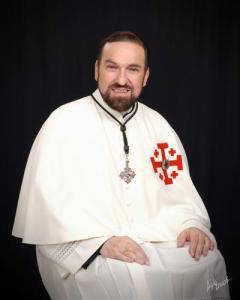